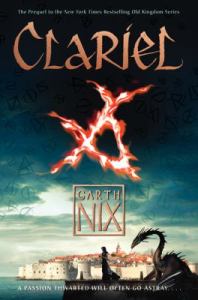 Set before the events of Sabriel, Clariel is a teenager whose parents brought her into the kingdom of Belisare against her wishes. Clariel and her family are related to the Abhorsen line and Clariel has inherited a Fury. Clariel wishes to escape to her forest back home at Estwael, but it seems political conflicts are keeping her in the walled city. She finally finds a way of escape but the risks are greater than she thinks, and she is drawn to the magic around her.

When I picked up the book, I didn’t know it was a prequel to the Old Kingdom Series, and on its own the book does well to explain the character. The book caters to people who are new to the series and to ones who know the series well. All the characters were likable (or easy to hate) when you got to know them, though I do feel that the book was shorter than I would like it to be, with some unanswered questions. But the book was interesting enough to keep returning to.

The most memorable thing about this book was definitely the Free Magic. The concept being that Free Magic is inimical to all life, yet it is free, unrestrained and that’s how it wants to be. Free Magic is vague and unknown as everyone calls it bad because the opposite, Charter Magic, is confined to symbols.