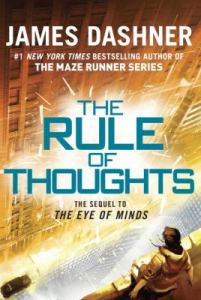 After Michael goes on an incredible adventure in They Eye of Minds, he’s back, except this time he’s on his own. The virtual world of the Sleep can be one of the best places on earth, however it can also be one of the most dangerous. Best friends Michael, Sarah, and Bryce have found this out the hard way. They embark on an adventure in the Sleep and reality to defeat the evil Kaine. He wants to use the mortality doctrine to populate the entire world with computer programs and he’s already begun.

I enjoyed how James Dashner built Sarah and Bryce up as they became bigger, more important characters. His surprises and sudden twists keep the reader on their toes. One of the best and worst parts of the book are the cliff hangers. Some are large, some are small, some are answered, and some are left hanging.

Any reader will always remember the exciting cliff hangers, they are the best part about the entire book.

Hello! I'm Mandy, the Tuckahoe Teen Librarian. Here are some random factoids about me... Favorite YA Novels: Unwind by Neal Shusterman, Ship Breaker by Paolo Bacigalupi, The Hunger Games by Suzanne Collins, and The Perks of Being a Wallflower by Stephen Chbosky Favorite Food: Chocolate and seafood (not combined) Favorite Band/Music: UB40 and any of the Cirque du Soleil themes Favorite Reference Question: Where's the restroom? ;-) View all posts by MandyTheLibrarian