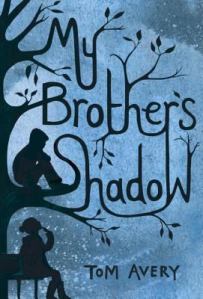 My Brother’s Shadow is about a girl named Kaia and her slow, painful recovery from her brother’s suicide a year ago, and a strange, new boy in school who appears out of nowhere and acts wild. The book shows Kaia’s process from grief to acceptance, and how she learns that people have to move on with life after tough events. The setting is mainly at Kaia’s school and home, but there are a few other scenes such as a subway and a bike path. The main characters include Kaia, an introverted 5th grade girl who lost her brother recently and is frequently bullied in class; “The Boy,” a mysterious, wild-child new kid who acts crazy both in class and during recess; Poppy, a mean, spiteful girl who takes advantage of Kaia’s emotional problems to belittle and mock her; and Luzie, an ex-friend of Kaia’s who sticks by her and comforts her when she has a particularly bad day.

I really enjoyed the emotional depth and realistic portrayal of grief. I also enjoyed how the book managed to not be too depressing nor too sentimental, and (even though I know it’s cliche) the fact that it had a happy ending. One thing I didn’t like was how in the beginning, it actually was a bit too depressing and sentimental, and how inhuman and weird (for a lack of a better word) Kaia seemed. Her character did become easier to sympathize with later in the story, though. The situations and events were, in my opinion, quite heartfelt and sincere, and the writing style was haunting and emotional.

One of the most memorable things in the book was when Kaia wrote and presented a book report about a book her brother gave her for her birthday a month before he died. In her “book report” for class, she does not actually write about the book itself. Instead, she writes about the back story behind the book, why her brother gave it to her, what her brother was like, and why it’s special to her. This scene was pretty touching to me, and I actually almost cried.