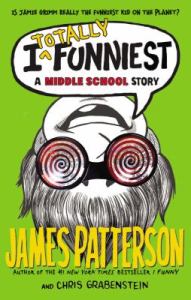 In this book, the national finals are coming closer with each ticking second. This contest will determine the funniest kid on the planet, and this means everything to Jamie Grimm. Jamie is a wheel-chair bound comedian whose dream was becoming the most hilarious teenager in all of America, but being a good comedian comes with a price. Already stressed out with having to cram in more material, he has personal issues swarming around as well. With all this pressure, he does not have much time to see his best friends, and he feels to be moving farther away from the people who he cares about most. Something tells him that things are not going to fall in place easily when the contest is over.

Soon enough, things are getting more intense. An enormous surprise is revealed, and the stakes are higher than ever, with the other competitors more aggressive and funny than he could have imagined. As this goes on, he understands that the worst disasters do not need to be personal to affect his life. Everything seems to be falling apart. With all this going on, will he have the courage to face it in the end?

I felt that this was a very entertaining read, with much humor.  The plot was well elaborated and detailed.  The different characters had different attitudes that were thoroughly described, and the different situations and events were written well.  The writing style of the author is well developed, and there is much fluency throughout the lines.  Additionally, there were some pictures, which contributed to the quality of the book.  There was also suspense throughout, which made it a better read.  Overall, I enjoyed this novel, and I would recommend it to a friend.

Much of this book stands out in my mind. One of the more memorable parts is how some of the contestants used betraying, heartless methods to get an advantage in the contest, regardless of who it affected and how major the impact.