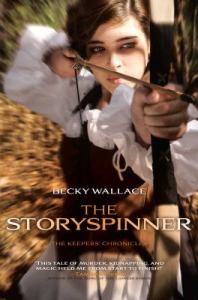 Growing up with the Performers, Johanna Von Arlo has learned how to do acrobatics and yearns to be a storyspinner like her father. However, after he dies, her now alcoholic mother and three brothers are forced out of the troupe. They struggle to make ends meet, and so when she is offered the job to work as a storyspinner for Lord Rafael DeSilva’s family, she accepts despite her dislike for him. What she doesn’t know is that she is in danger. Girls who look like the lost princess – like her – are being murdered. At the same time a group of people gifted with magical talents, called Keepers, are on a race against time to find the lost princess. She is their only hope to save the magical barrier between their land and hers.

One thing I like about this book is that it’s written in five different perspectives. You really get to know each of the characters and build a connection with them. The Storyspinner also had just the right amount of romance and magic, and Johanna and Rafael were amazing protagonists. She was bold and cared a lot for her brothers, and although at first I didn’t like him, Rafael turned out to be a complex character who was honorable and devoted to his people. There was a fast-paced plot, plenty of action, and overall it was an interesting, lighter read. The ending was definitely a serious cliff-hanger, and I’m excited for the sequel!

One thing that made this book memorable were the different perspectives. You don’t often read a book from five different points of view, and it wasn’t confusing trying to keep track of them all since each character was so unique.