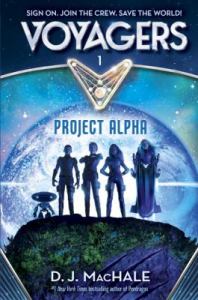 What if the world was running out of energy? What if the electricity was shut off every night and turned on every morning? In the future, this is the reality. They needed more energy, and they knew where to find it. To get there, the government designed a spaceship that traveled at Gamma Speed, but only 12-year-olds could ride it. Any older and they would be too old to safely return. That leaves the world’s fate to kids, four of the best, but can they save their planet before it is too late?
Now the world-wide competition is down to the final eight, and they undergo a series of tests that would determine the four kids to go on the mission. Eventually, the four are chosen, and soon they take off. All four are excited. However, the mission is more dangerous than they ever expected…

This book was exciting, and it was full of twists and turns that made it fun to read. Each character was unique and skilled in their own way. My favorite character was Anna, who acted superior to the others. She preferred to work alone, and she often overreacted when things did not go her way. Despite all the great components of this book, it was a bit below my reading level.

The most memorable part of this book was the beginning. The final eight battled what they thought was a Raptagon, though it turned out to only be a hologram.