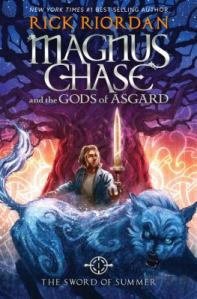 Magnus Chase is an orphaned homeless boy living in New York. Little does he know that his life is going to be completely changed. When his cousin, Annabeth, and Uncle Frederick appear in New York looking for him, Magnus breaks into his uncle’s house, and what he finds there is years’ worth of Norse artifacts and his uncle waiting for him. In an epic battle to the death against a fire giant using his new found sword, the Sword of Summer, Magnus goes to Hotel Vahalla. There he meets his guide, Samirah, and finds out a shocking secret about two homeless guys who always seem to be following him, Hearthstone and Blitzen. In a race against the clock, they hurry to save the world from Doomsday, aka Ragnarök, and the unleashing of the beast.

Rick Riordan has done it again! I love this book! And I am so happy to see that Annabeth Chase has made a comeback in this book. His sarcastic, witty style of writing has the ability of making any scene hilarious. And the characters in this book are so complex and have such strong backstories that show through, even in the first book. Rick Riordan’s unique modern twist on Norse gods and giants is something worth reading, for sure. With references to pop culture and even to his previous books, I can’t wait to see what’s in store for Magnus Chase.

One of the most memorable things about this book is the subtle message that it gives us. Many of the main characters in this book are bullied for their intelligence, religion, disabilities, and heritage. They don’t fit in for whatever reason and instead of stooping down to their bullies level, they carry on and do heroic things that are worthy of Odin himself. In the end, they show their bullies that they won’t let affect them and did some amazing things. Something that we could all learn from.