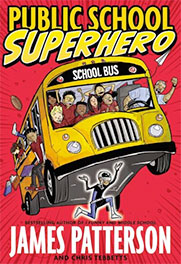 Kenny Wright, a comic-loving “geek”, lives with his grandma in a rough neighborhood in Washington D.C. The story starts off with Kenny beginning his first day of 6th grade at Union Middle School, although it doesn’t go as planned. Kenny’s grandma insists on walking him to school (Kenny thinks it’s very embarrassing), hence where Kenny’s nickname, “Grandma’s Boy”, comes from. Then, he gets bullied by Tiny and gets sandwiched in a fight between the two Quaashie’s, earning him a detention that he has to keep a secret from his grandma. Furthermore, Kenny ends up getting in a fight with Ray-Ray, and the principal, Dr. Yetty, is furious. She gives Kenny the option of getting suspended from UMS for the fight or teaching Ray-Ray how to play chess.

This book was definitely an action-packed read that I could not put down. The story line was easy to follow and was nothing like I’ve ever seen before! Many middle-schoolers can relate to this story and it sends off a really nice message. As the book progressed, I truly saw a change in the characters.

One aspect of the book I found special was how there were almost two separate stories in the book, one was in word form and the other was in comic form. I thought this really represented the two personalities of Kenny, imagination and reality.