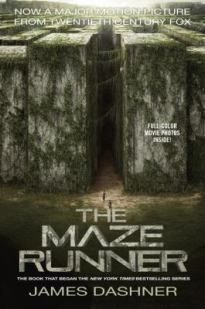 Thomas, a sixteen year old boy, does not know why he was sent to the Glade, the living center of the terrifying and colossal Maze. Thomas does not know who his parents are. He does not even know his last name. In the Glade, he meets fifty other teenage boys who also cannot recall any past memories. But all of the boys know one thing. They know that the Maze is a horrifying place where grotesque and savage monsters known as the Grievers roam around searching for human flesh. The boys want to escape the Maze, but no exit has been found yet. The situation becomes dire when a strange girl in a coma is brought to the Maze. Right after she wakes up, the sun disappears, causing the crops to start dying. Without any food source, everyone would die. Also, the huge doors that surround the Glade that are supposed to close every night to protect the boys from the Grievers are not closing anymore because of the girl’s arrival. It is a matter of time before one in the Maze dies. Can the Maze’s exit be found before everyone dies? Can everyone get their memories back and figure out why they were put into the Maze in the first place?

I enjoyed this book a lot. I read the entire book in one sitting because I had to know what happened next! Although the vocabulary used in this book was not very advanced, the lack of advanced vocabulary and use of slang made the book very casual and easy to understand. My favorite character was Thomas because he was brave, smart, and humble, while many other characters were arrogant and mean. One thing I liked about the book was how it was not very relatable, which made the book more interesting. I mean, what sixteen year old gets thrown into a gigantic Maze with all of his memories erased? Although I liked this book very much, I did not like how it became very fast paced towards the end. I had to re-read some parts at the end in order to understand what was going on. I would recommend this book to everyone who enjoys reading the Lord of the Flies and Hunger games because I thought that this book was a mix between the two.

The original slang that was used in the book was very memorable. Reading slang such as “shuck”, “klunk”, “greenbean”, and “slinthead” made me laugh.