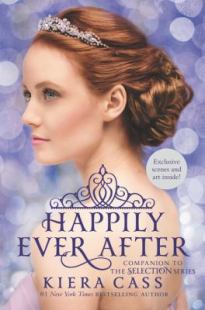 Happily Ever After contains four short stories and an epilogue to Kiera Cass’s book The One. Each short story is from the point of view from the Prince, the Guard, the Queen, and the Favorite. Every story tells about the character during the Selection, a competition where 35 girls get the chance to be the next queen. In “The Queen,” find out what happened when Queen Amberly was in the Selection. “The Prince” tells about Prince Maxon before his Selection and when he met the girl of his dreams. In “The Guard,” Aspen falls in love, but will still fight for his first love. “The Favorite” is from Marlee’s point of view, and is about when she and America Singer was in the Selection.

Kiera Cass writes in a descriptive way that brings you into the story. Her writing is realistic. She writes about each character so well, it’s like you know them personally. The situations that the characters are in are sometimes situations that actual people often get into. Each short story has a way that connects to Cass’s The Selection series. It’s like a giant web that brings everything together.

After reading this book, more things from “The Selection” series made sense. I loved how parts of the story weaved into “The Selection” series. The beautiful illustrations really pulled me into the book, as well as how descriptive the writing was. Kiera Cass has written yet another lovely book.