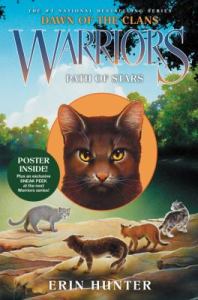 In the final book of Erin Hunter’s Dawn of the Clans series, settled in camps, cats that come from other lands are about to face off with awaiting battles from another mysterious, harsh group. This “new” group is led by a ferocious cat, who goes by the name of “Slash.” His allies are threatening the other five groups with starvation by using any means, including killing, to steal their prey. When one of the leaders of the five groups, Clear Sky, and his group try to object lightly toward the rogues, Slash delivers a dangerous trade; one of the groups cats for a price. Slash threatens to kill the cat if Clear Sky and the leaders don’t agree to his demands. Clear Sky is terrified for her and so, reluctantly, tries to fulfill the demands. The groups are wary, but they help him bring back Star Flower. The danger, though, has still not passed. After one of Slash cat’s accidentally leads a dog into his camp, Slash abandons his own cats, who join the other five groups. But not all seem worthy of the groups’ trust, and some seem just too good. “Which cats can and can’t be trusted” seems to be the question. The other question remaining is what exactly is the trouble that Slash has warned the groups about? What will that cat do next?

I liked it a lot! It had great detail that allowed you to make vivid imagery in your mind about all the scenes. There were different sorts of scenes like when Thunder and Lightning Tail were spying on the rogue camp or when Star Flower got kidnapped. It had awesome action, suspense, fear, and lots of laughable moments too. Despite a sad end, it was great!

The memorable thing about this book is the way Erin Hunter wrote the scenes. She made the battles seem less harsh then they were without losing any action or suspense. She really made the details sharp and also made them easy to imagine, so even a toddler could picture them vividly. Erin Hunter really put effort into this book and you could see that she had. I could really feel everything in all the scenes, characters, and attitudes. I would advise everyone to read this book and wait for another famous, all-known Warriors book to come!