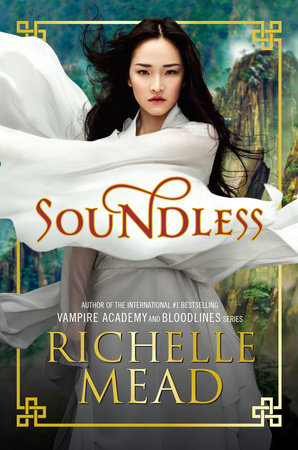 Soundless by Richelle Mead is a strange mix of sci-fi and dystopia. Soundless is about a village in a dystopian-China where no one can hear, and no one could hear for generations, until Fei was able to hear. But that is the least of Fei’s worries. Her village is sent limited food supplies, and the food supplies continue to get even more limited unless something is done. Fei and her friend, Li Wie, embarks on a journey to someplace that is only legend, to where the food is sent. On the journey, they find that there are more people like Fei, and those people aren’t friendly to those who cannot hear, and an even more startling discovery….

I loved the concept of a whole village not being able to hear, and I liked that Richelle Mead italicized the sign language. (Fei’s village signs to communicate.) I liked Fei, a strong female role model who had her visible vulnerabilities, even more then Iiked some other strong female role models in literature. It is interesting to see Fei realizing that she can hear, and learning to hear, getting used to the sounds.

I don’t know what Richelle Mead’s plans are for this book, whether it’s a standalone novel or part of a series, but I like the flexibility of it.

A memorable thing is that they didn’t treat deafness as strange, or sad. They were just…used to it. It was refreshing, although I was a bit disappointed the people who were going blind were not treated the same.