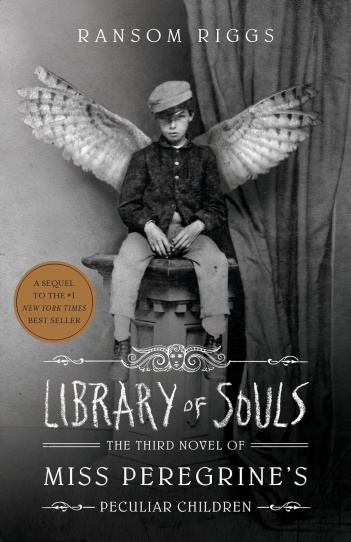 This book was the last book in the trilogy for Miss Peregrine’s Home for Peculiar Children. I believe that the author of this trilogy found a bunch of old pictures, and then strung together a rather unique story. The whole series is about boy named Jacob, and the first book of the series is about how Jacob met the peculiar children with peculiar abilities of Mrs. Peregrine’s home for peculiar children (hence, the title of the first book). This book, however, leaves off of a cliffhanger from the second book, where the peculiar children are being threatened.

I read the first book of the series two years ago for school, and the photographs that were both in this book and the first book are quite interesting and unusual. Riggs could have done a better job making some of the placement of the photos less awkward (at least, that’s what it felt like to me).
Riggs’ writing for a young adult book is very good; I could easily imagine this being turned into a thrilling action movie. However, for me, I was disappointed in the characters; sometimes it seemed as if the main character cannot think for himself (as well as lacked a personality, unlike his girlfriend).
The romance in this trilogy isn’t too bad compared to most young adult books. Although here, I don’t think that the romance was necessary… a platonic, tight friendship would have worked out just fine (and in fact, I think that that would keep many readers reading this series to see if a relationship happens or not).
But besides the writing details, the overall plot of this story is unique. There were parts of the plot that were unnecessary, but some parts of the plot (especially toward the end) were enjoyable. Frankly, I found the end to be a bit too cheesy, but it’s a good ending to the series. I think that most people would enjoy this book if they didn’t look into the details as I did.

The reason why this book is so popular and appealing is because of the amount of interesting photos that are included in it. Riggs created a fascinating world out of the combination of his imagination and strange photos, and that is what I most enjoyed about this book.