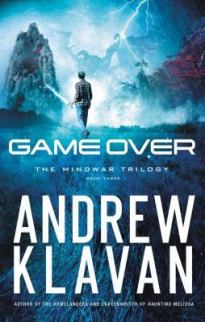 Rick Dial’s life is turning into a nightmare. As his waking life and dreams converge and overlap, he finds beings and creatures from the MindWar Realm in reality. This Realm is a virtual reality created by a Soviet terrorist named Kurodar, through which the madman can enter and control any and all computer systems. With the ultimate goal of bringing down America, Kurodar uses the connection within Rick to slowly fulfill his ambition. Rick, an American MindWarrior, has survived this virtual reality twice and has been able to control it. However, after a recent incident in which he proceeded directly into the real world, a connection has formed in his brain. This link allows Kurodar to hack his way to the other side of the planet and infest the environment with gruesome, half-animal beings with no purpose but to fight and cause chaos. After unintentionally entering this computerized world in his dreams and being controlled in his sleep, Rick realizes that he has no choice but to return and fix all the remaining problems. But in doing so, he will have to face what even Kurodar was unable to. Ultimately, he will have to risk the lives of his loved ones and himself if he is to save the world from destruction.

This book was entertaining. It was well written, though being the third book in a series makes it somewhat hard to follow in the beginning. The book starts with little action, and contains more adventure and suspense throughout the middle and end. The characters are described well, though a few more details would have helped the reader throughout. The character’s personalities are unique and thoroughly described. There was not much humor, but this does not detract from the book. I enjoyed the situations and the settings that were described in the book, as they were different from those of an average read. Overall, I felt that this was a well-written book, and I would recommend it to a friend.

There were several memorable things about this book, but one particular part that stood out was its similarity to video games in the regard of its settings. The entire MindWar environment reminds me of ways it can be depicted in real life. One such example that stood out even in this category is the Golden City and how it looked destroyed.