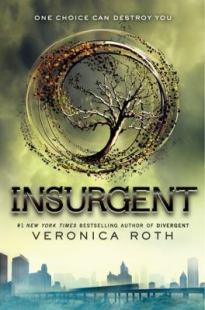 Insurgent is the third book in the Divergent series and takes place right after where Divergent (the first book) ends. Unlike the previous book, Insurgent is more focused on Tris, Tobias, and her struggle with the government, specifically Jeanine. It opens with Tris and other people originally from Dauntless or Abnegation take refuge in Amity, and quickly Amity’s peace loving no conflict ways stir up trouble with Tris and other non-Amitys. However, soon after Erudite, the people they were taking refuge from, arrive looking for Tris. Narrowly escaping from the hands of Erudite, Tris and friends quickly take refuge with factionless (a group of people rarely talked about until now) and make a plan to take over the city and overthrow Jeanine.

Honestly, as somebody whose now read the whole series, Insurgent is the most disappointing book in the trilogy. First, the complex character of Tris has both her ups and downs. I thought that Tris’ trauma from the events in the previous book was very refreshing to see and gave her more realism, as well as connecting the books and making it seem like one continuous story. Speaking of connection, I really liked how Insurgent picks up right when Divergent ends, so there’s no mystery hiatus or gap in between action. This book is also a lot more action based, and I can see how that can cause distaste in some people or praise by others. It is more exciting, but there is so much action the events seemed stringed together rather than a continuous plot. The first book really shined with its characters, but in Insurgent, as a sacrifice to more action, character development declined. All the characters, other than Tris, were very flat, like Peter and Erudite being so evil to the point of it having a comedic effect, and Four losing most personality established in the first book other than devotion to Tris and hatred for his family.

Honestly, the most memorable thing about the book is the new technology brought in and the descriptions that came with it. The whole apocalyptic but also futuristic setting was more defined.