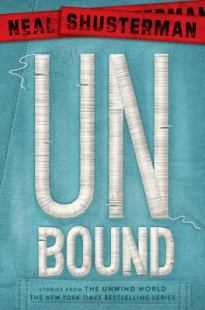 Unbound, a member of the Unwind Dystology, is about a society that deals with its out-of-control teens by un-winding them, and then transplanting more than 99.9 percent of them into other people. This is a problem for teens that accidentally commit something wrong, as they are in danger of being transplanted. Connor, Risa, and Lev are the protagonists who seek to eliminate the organization murdering these teens, and stop the organization from becoming out-of-control itself. Previously, Connor, Risa, and Lev destroyed the Proactive Citizenry so now they are expected to be safe, but that is not what always happens in the world today.

My favorite part of the book would have to be in the beginning of the book where all three characters meet again and discuss what they did in the past. For those who had not read the previous books, this would have given away a lot, but generally you read books in chronological order. The reason that I really enjoyed this part was because of the fact that this part was the only part in the book where they were not aware of what was happening, and really it was quite funny when they found out exactly what was happening. I really liked the suspense that this added to the rest of the book.