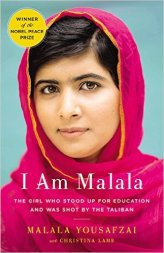 In the Middle East, the majority of the women want to have the same rights as men, but most of them are bounded by the customs of their religion. That is why Malala Yousafzai speaks out loud about female rights. This book is an autobiography of Malala Yousafzai. Malala Yousafzai is a Pakistani girl who advocates rights for females. She has been an activist for female education ever since she was young. She has received the Noble Peace Prize, has spoken before the United Nations, and has obtained many other awards and honors. But the attention that she received made her live in constant fear and allowed the Taliban, an Islamic political group that wishes to take away female rights, to locate her and shoot her in the head. Amazingly, Malala survived getting shot in the head. After she fully recovered from the shooting, she continued to promote female rights. But will females who live near the Taliban even obtain full human rights?

I thought that this book was great. This book made me realize that the world is not perfect. I am very fortunate to receive an education and live in a place where violence is not frequent. I liked Malala’s confidence and dignity throughout the book, but at times, I felt that Malala was too ambitious when expressing her opinions. Maybe that was why the Taliban tried to kill her. But one thing that I did not understand was why the Taliban did not want girls to go to school. I believe that everyone should receive equal rights and equal educations. It is not fair that females in some parts of the world are treated unreasonably. Overall, I thought that this book was very good. I would recommend this book to everyone.

One memorable part of the book was when Malala survived getting shot in the head. It is unbelievable that she still continued to advocate female rights in public after being shot.