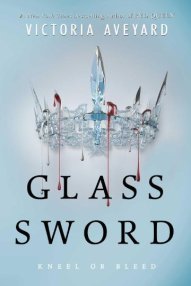 Glass Sword follows Mare Barrow, the main character of sixteen years. Raised a Red in the poverty of the Stilts, Mare Barrow never knew she was special until an accident in the royal palace. After this, she is forced to live a lie as a lost Silver princess. Those with red blood are not suppose to have the powers of silvers, but Mare has the ability to control lightning. After the casualties and betrayals that take place in Red Queen, Mare is forced to flee. This sequel to Red Queen begins on an underground train leaving the royal palace and Maven, the treacherous new king. Mare, along with old friends, new allies, and a mysterious prince, takes on a search to find all of the people with red blood and Silver abilities. If they can find enough of what they call newbloods, then they can form and army to defeat the oppressive Silvers once and for all. However, Maven is searching for these newbloods too, and if he finds them first, they aren’t getting out alive.

While I thoroughly enjoyed the first book of this series, Red Queen, I was somewhat disappointed by the happenings of Glass Sword. The plot felt repetitive, the writing style was lackluster, and Mare Barrow lacked and real depth. And, what depth she did have made her a self-righteous and annoying character. However, despite these setbacks, I love the idea of the series and how complete and real the fantasy world felt.

One of the best things that kept me with this book was wanting to know what all of the newblood’s abilities would be. Every single Red with Silver powers had a unique and unheard of ability that kept the book fresh and exciting.