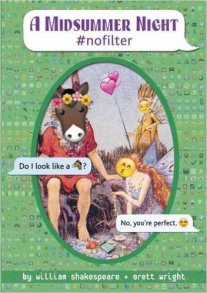 For those who enjoy reading classics and keeping up with the age of social media and texting, the ultimate book has been released. One of the most heard-of Shakespearean tales, “A Midsummer Night’s Dream,” captures and transposes the language of the past into modern texting. The story, with a plot similar to the original version, continues as follows. The fates of four lovers have been entwined by fate; these main characters are Hermia, Lysander, Helena, and Demetrius. In addition to these characters, there are additional people involved, such as Bottom and Flute from the play group, and Oberon, along with Titania. Fairies are also involved, in addition to the king and queen, Theseus and Hippolyta. Instead of being in the format of a play, poem, or novel, this book changes the entire story into group chats, incorporating humor infusing the story with modern culture. The emoticons and abbreviations combine to make the ultimate romantic comedy inspired by a classic Shakespearean piece.

I felt that this was an entertaining read quite similar to the real Shakespearean story. One of the most noticeable aspects was the humor, which was placed well and did not seem forced. The plot too was well-developed, and the situations were funny as well. The entire writing style of using group chats and emoticons made one look at the story from a different perspective, a different light. Although this was intended, some of the excessive substitutions made the true meaning harder to ascertain. The plot was, in majority, the same as it was in Shakespeare’s original play – as a result, it was detailed and explained thoroughly. Overall, this was a humorous and entertaining read, and I would recommend it to a friend.

Although it may seem redundant, one of the most memorable factors of this book was the entire usage of group chats and emoticons. The substitutions provided a change from the usual flowery language of Shakespeare, and instead, placed it in a common, modern perspective. After reading the book, the format is what my mind pondered over the most.