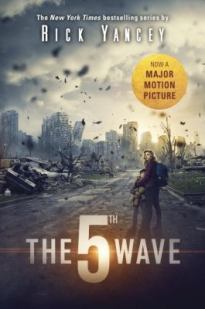 It was the last normal day for Cassie. Things instantly changed the next day: airplanes were falling from the sky, the power shut down, and an enormous spacecraft hovered over in the sky above Cassie’s home. This was known as the First Wave. Then, the Second Wave hit, literally. The Third brought a rampant plague which killed almost the entire population. The Fourth Wave: only the lucky ones survived off of anything they could find. No one can trust anyone else, because not all humans are humans. Cassie goes on a dangerous and twisting journey that puts her in a state of surprise, love, and sadness.

What a powerful, twisting book this was to read! Each page was another horror story to read; the action of fighting and shooting kept me up on my feet. The characters personalities were very well-written, especially the actions done by each. If you love the Hunger Games or the Divergent series, this book is definitely a great thriller book to read!

This book reminded me to live each day to its fullest. In The Fifth Wave, as every day passes by, you will never know when the last normal day will be. This book also told me to realize, if there is a goal I want to perform, I have to use all my willpower to reach it, just like Cassie did to get back together with Sammy.