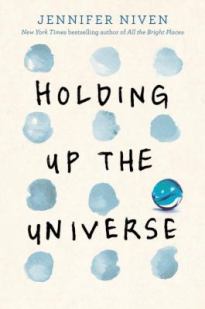 Introducing Jack Masselin, a seemingly stereotypical high school – charming, hilarious, life of the party – that is constantly living in fear of embarrassing himself because unbeknownst to his family and peers he has prosopagnosia. Prosopagnosia is the inability to recognize faces of familiar people, which Jack acquired through hitting his head one day. And introducing Libby Strout, who was once dubbed “America’s Fattest Teen”, who got that way after eating her griefs when her mother passed until she almost killed herself. Now on the road to recovery, she is ready to begin high school as a junior. Through a series of unfortunate events, Libby and Jack are forced to get to know each other through an after school program where they strike up a friendship and both go through a journey of self acceptance through their relationship with one another.

Something I really enjoyed about this book was the format and characterization of the two main characters, Jack and Libby. The book is divided into a series of point of views, alternating between Jack and Libby, and does a really good job of getting into their heads and portraying them realistically. It’s interesting to see how Jack deals with his disorder and how Libby deals with grief and anxiety. While both characters are characterized into stereotypical roles, Jack as kind of a bully and Libby as a victim, the author humanizes them through inner monologue and positive and negative traits. Although, there were times in the book where Libby’s narrative was far stronger than Jack’s, so it’s a bit uneven in the detail Niven gave to her characters.

Something really memorable about this book was the nature of the relationship between Jack and Libby. Although both are very important in the other’s lives, it was nice to see it not falling into the played out trope of being attached at the hip. They both value the other, but they still carried out their own conflicts and goals independently.