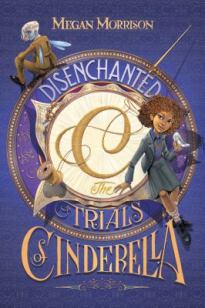 After her mother died working in a sweatshop, Ella Coach thinks that every worker in the Blue Kingdom deserves better care. But the only way she can act on this is with support, which Ella doesn’t have. But this all changes when she meets Prince Dash. After the curse was finally broken, Dash wants to make amends for all the evil things the curse forced him to do. Unfortunately, Dash doesn’t know what to do. That is, until he gets partnered with Ella for a project…

As a fairy godfather, Serge grants wishes for anyone whose name is on the list. These people are those who are rich enough to pay the fee, instead of those who are in need. But in one of the letters asking for a wish to be granted, Serge finds someone that really needs his assistance: Ella Coach. As the three work to a better future, they all slowly improve their lives in ways they have never imagined.

This book is just as wonderful as “Grounded: The Adventures of Rapunzel”! I like how it faces a very common issue: workers’ rights. Megan Morrison has captured an important problem in this stunning tale with ease, creating an original, fairy tale knock off that all readers will enjoy. The three points of view didn’t clash with the story at all, and made the book more interesting as you saw each person’s thoughts, attributes, and emotions.The plot was creative and fascinating, making me engrossed in the story. This book is definitely for fans of fairy tales.

I noticed how Ella was jumping into action right away for her protest for workers’ rights, while on the other hand, Serge was hesitant to go against Jules to make things better. This shows me how dangerous it is to be caught up in the wrong thing, since Serge was fully aware how wrong the wish granting system was. But at the same time, based on Ella’s experience, it’s also not the best idea to go headfirst into action, without a plan or a cool head.