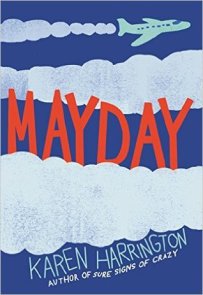 Wayne Kovok is a young teen who has survived a plane crash, which has had a devastating impact on his life. His uncle, who was in the army, was killed overseas and Wayne and his mother were coming back from the funeral when the crash happened. Wayne spends most of the book trying to find the memorial flag from his uncle’s funeral, which was lost in the crash. Also, he faces many problems with his drill sergeant grandfather.

Overall, I think the book was very interesting as the author included several aspects and conflicts in Wayne’s life. This helps the reader somewhat understand what Wayne was going through. Additionally, I enjoyed how the author included issues in Wayne’s personal life, such as dealing with his crazy grandfather and a girl he likes. However, there wasn’t much action in the book which did make it a bit boring at times, but I guess that comes down to personal preference.

One memorable thing about the book are all the conflicts and arguments between Wayne and his grandfather. I also enjoyed the fact that Wayne didn’t like his grandfather at first, but as the book progressed, Wayne grew attached and his relationship with his grandfather became much more positive.