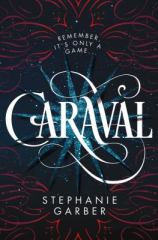 For years, Scarlett Dragna has written to Caraval Master Legend, hoping to receive tickets for her and her sister, Tella, to attend the game. At age seventeen, she finally gets a reply, complete with three tickets to Caraval–one for sixteen-year-old Tella, one for Scarlett, and one for Scarlett’s fiancé. With help from an annoying sailor named Julian, the sisters embark on a journey to Legend’s private island. When they arrive, however, Tella is kidnapped, and the entire game is centered around finding her during the five nights of Caraval. Julian and Scarlett must work together to find the clues left by Legend. Caraval is a game filled with magic, but it’s just a game… right?

In the first chapter, I could imagine a young Scarlett writing letter after letter. During Caraval, everything is filled with magic and illusions. The island includes vibrant enchanted buildings connected by canals. I enjoyed how Julian’s character developed through the book, becoming more than just a sailor. One of my favorite parts about Scarlett was how she had a color for every emotion, including a hatred of purple, a color often referenced in negative situations. There was also a wide variety of minor characters, including Dante, Jovan, and Aiko. The three of them were completely unique with varying roles and personalities.