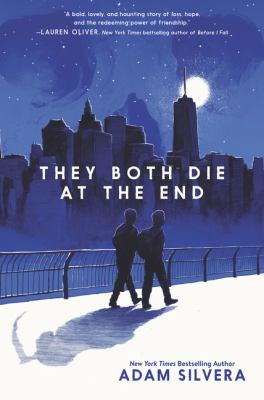 They Both Die at the End is set in an alternate version of reality where people get advance notice of their own deaths. When two teenage boys, Rufus and Mateo, get the call, they each do what any teenager does: turn to an app. The Last Friend app connects people in need of a companion on their final day, something that definitely applies to Rufus and Mateo. As Rufus and Mateo careen around New York, saying goodbye to friends and trying to heal a few old wounds, it becomes about so much more than just living your last day well. They Both Die at the End is a story of friendship and fate, of living and dying, and of how it’s never too late to change.

For the first half of the book, I was mildly intrigued by the concept of knowing when you were going to die, but I was not all that hooked by the characters. However, as Rufus and Mateo stop being strangers and start to become friends, I found myself utterly captivated by their story. While I am not sure I believe that two people can become such good friends in such a short amount of time, Rufus and Mateo almost had me convinced. I also love Adam Silvera’s writing style. It’s impossibly, often heartbreakingly, earnest, at times humorous, and always capable of showing the reader life through his character’s eyes.

The thing about They Both Die at the End that I think will stick with me for a long time is the relationship between Rufus and Mateo. There is a purity to their relationship, perhaps because they have neither secrets nor history, that is unlike anything I have seen in other books. It gives their relationship more weight, because even though they will only be friends for one day, they have the kind of friendship I think everyone wants to have.