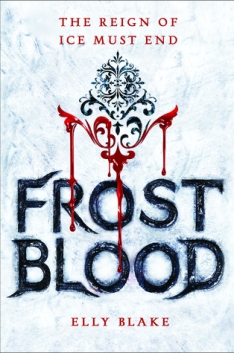 Frostblood is a dramatic fantasy novel about the rebellious dark horse who is trying to take down the evil dictator of her land. Ruby Otrera has the rare gift of fire, a magic of the blood that is called Fireblood. Since the king is Frostblood and believes that Frostbloods are the dominant group, Ruby has had to keep her gift a secret, especially in her cold, snowy village. However, when the king’s soldiers find her, Ruby’s world is flipped 360゜, and she finds herself separated from everything she’s ever known. Ruby lives in medieval times, though the location of her nation is unknown. After being rescued by mysterious men, she is taken to an abbey where an unexpected group of people take care of her. They want her as a tool to overthrow the king, but her job is a very dangerous one. Ruby finds love in one of her trainers, but Arcus seems too icy to be able to love her back. With him and the rest of her new peers, Ruby attempts to abolish the king and his tyranny, but Ruby is still conflicted with self-doubt and the trauma of her past.

I found this book to be a highly engrossing page-turner. Arcus’s and Ruby’s relationship was a unique one, given that it seemed Arcus might be incapable of admitting his love for Ruby. This book was written as first person limited, and I believe that this was the perfect point of view for the book. This is because it was important for me as the reader to understand what Ruby was feeling, and what caused her to make the decisions she did. One minuscule problem I had with this book was that one of the lesser characters seemed to have something against Ruby for no reason. Brother Lack hated her guts from the beginning, but even after she saved his friend’s life, he still ratted her out. This was truly the smallest error I could find in this novel, so overall I found this book to be a near-perfect work by the author.

This book gave a very dramatic example of discrimination that made the whole plot quite memorable. While Frostbloods had their own temples to worship Fors, the wind god of the north, and were the only ones entitled to rule the kingdom, the Firebloods had to hide themselves. This resembles the discrimination people are still subject to today when it comes to religion, gender, and (in America’s history) color of skin. Ruby had to desperately struggle against this oppression, and this sheds light on factual history, putting a fantastical spin on the otherwise hard-to-talk-about subject of discrimination. I got to personally understand what she was going through, making her situation more clear and memorable.