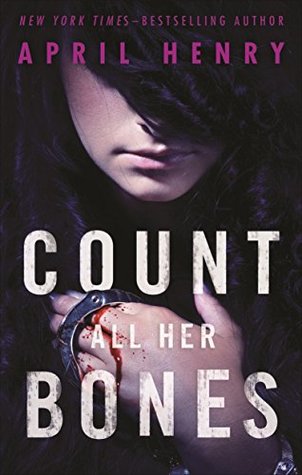 Count All Her Bones is an amazing tale about one of the most traumatic things that could happen to you as a child: being kidnapped. Now, this is the second book in April Henry’s series that focuses on a teenage girl named Cheyenne and a teenage boy named Griffon. Cheyenne is the daughter of Nike’s owner so is a perfect girl for a large ransom. While Griffon is a boy with an abusive father named Roy and a non-existent mother, who has been forced all his life to do illegal things. Now they are both waiting to testify at Roy’s trial. Cheyenne’s kidnapping in this story is quite different than most for two reasons. One, she is blind and, two, this is the second time she was kidnapped. After her first experience, she was trained to fight and use almost anything as a weapon, which seemed stupid to her before but now she is using it to fight for her life. And what happens when her love interest and accidental kidnapper from Girl, Kidnapped, is in danger, too? Both characters must overcome the challenges life has thrown at them in the past and the ones it plans to throw in the future.

This series and this book in particular are really what got me into realistic fiction. I love the way April Henry writes because she can really help you understand what the characters are feeling at the moment, and, truthfully, I think that is one of the hardest things to do as an author. This skill is very important in this series because the plot is very much driven by the characters’ feelings and how they change throughout time. One thing I love about this story is that Cheyenne is from a rich family and a good life who has one tragedy that renders her blind. While Griffon is poor, unloved, and feels like he is alone in his family since he is different. This doesn’t stop them from finding common ground though and becoming friends. I do think the situation might be a little far-fetched, especially in the second book, but I think everything that happens because of what the characters go through is truly needed for the reader to feel a sense of contentment at the end.

One of my favorite moments in this book is where Cheyenne is fighting someone and defending herself while Griffon is just on the side about to help when he sees he doesn’t need to. Griffon is pretty sarcastic so his comments on it are hilarious, and I love how Cheyenne just ignores him and continues with the job. These moments when Griffon and Cheyenne act like teenagers are very important to me because it shows more of the how the characters act when they aren’t in a life or death situation so you can get to know them better.