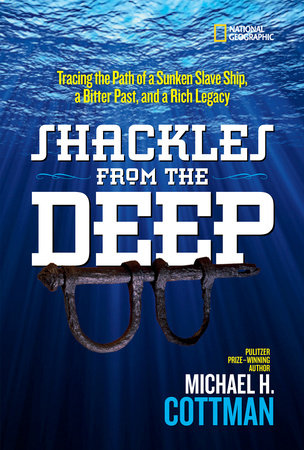 In 1972, Moe Molinar, an underwater treasure hunter, discovered shackles and a cannon while searching the sea floor of the New Ground Reef. Little did he know that he just found the remains of the Henrietta Marie, a 15th century slave ship, that sunk near Key West, Florida during a storm in 1700. In the late 1900s, an excavation of the site lead by Corey Malcom uncovered more shackles, cannonballs, elephant tusks, and much more. Previously, David Moore and his team had discovered the watch bell for the ship, which revealed the name, the Henrietta Marie. This investigation caught the attention of an African American journalist, Michael H. Cottman. The intriguing mysterious possessions of this “English Wreck” gave Cottman a thirst to retrace the origin and the past of the 300-year-old slave ship. With the help of David Moore and his research, Cottman made the decision to embark on a journey to find the route of this ship and what exactly happened to its passengers. This trip led him to drive through the countryside of London, walk on the docks of Barbados, step inside of the “Door of No Return” on Gorée Island, go to Port Royal, Jamaica, step on the land of Senegal, and off into the Caribbean. Throughout his trip, Cottman learned more of his culture and the past of his people; he walked through the path of hundreds of African men and women, all who had a great tale to tell. This is where he learned of his African heritage, the struggles of the families, and most importantly, of the legacy the African men and women left behind.

This book was a doorway that led my eyes to a whole new version of the world. Reading what the author wrote in his research, it made me realize the true horrors of slavery. First, members were torn apart from their families. Then, they were taken upon a ship where sickness roamed the cramped spaces and death was just around the corner and finally, were auctioned off like property to mostly cruel land owners. All that hardship is just so sad if it results in serving a master for the rest of their lives and then just wasting their lives dealing with crops and serving food to the person who treats them like dogs. I have realized that not only back then, but in some parts of the world, this malice is still going on. Inside someone’s head somewhere on this Earth, the person they are treating like sheep is somehow lesser than they are just because of how they look. Looking at those tight chains that seemed painful to wear on the cover, I could not understand the reason this was happening in the first place. Humans should never treat their own kind in such a way, especially since we are no different from each other. All of us are humans, we all deserve respect no matter what our race, what we look like, and how intelligent we are. The author points this out many times throughout the book, but in more of a personal manner. I felt like this was an annoying factor because the author would talk about how it felt it was a connection to him, and not really of the issue. Although I did understand how he was feeling.

What I found memorable about the book was how determined Michael H. Cottman was to retrace the steps of the newly found ship and locate every place and person that the Henrietta Marie had a connection to. For instance, in the beginning of his search, Cottman faced a setback that could have stumped his determination, but he kept reaching out and trying, which lead him to a huge clue in which he accepted graciously and went to find out more. This book is truly a page turner and should definitely be read by everyone.