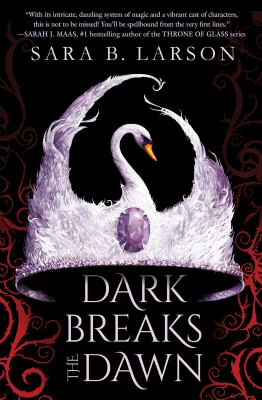 This suspenseful twist on the classic swan lake story brought a new aspect to “light and dark” and really packed action onto every page. Evelayn is the crown princess of the light kingdom, Éadrolan, which is in the midst of a 10-year-long war against its enemy, Dorjhalon, the kingdom of darkness. A fantasy world, the setting of this book includes a similar yet slightly different race of people who live for multiple centuries and often have very diverse skin tones. In addition, these people have magical powers that are given to them from the ruler of their kingdom, and can be fully reached at the age of 18. Evelayn is finally acclimated to her powers in the beginning of this book, and is quickly forced to take up the post of providing her subjects with light powers after she is forced to become queen at a very young age. Luckily, she has a mysterious assistant who she grows to love, and who truly cares for her as well. While trying to harness her powers, navigate her new love life, and become a mature queen, she must also manage the waging war, a task that takes up most of her time and leads her on dangerous quests like trekking through the dark northern kingdom. Evelayn shows strong magical abilities, but this book showed that she would definitely need more training, especially during the last chapters of the book

I found this book very entertaining and quite engaging as well. While many books like this have the main character miraculously saving the day with seemingly easy-to-learn powers, Evelayn is not able to shape shift, a skill usually achieved soon after someone turns 18, and struggles with this throughout the novel. The most important distinction between this book and others, however, would have to be the shocking ending. With regards to those who want to read this book (which I would recommend), I will not spoil the ending, but I can assure you it is far from your archetypal fairy-tale resolution. One thing that I would like changed or at least explained was the mysterious powers Lorcan, one of the two Dorjhalon princes, possessed. This talented dark magic-wielder showed off some never-before-seen magical abilities that Evelayn and her subjects had never even dreamt of. However, Evelayn was, as previously mentioned, still exploring her powers,…and I still found the book to be a wonderful read.

Something I loved about this book was the love and support that Lord Tanvir showed for Evelayn even through the toughest times. He would find ways to keep Evelayn both on track in her political life and happy in her personal life by treating her like she was more than just a stepping stone for his own power, something I found quite memorable. I still had my doubts about his loyalty and what Evelayn truly meant to him, but the only way to find out his true intentions will have to be through reading the novel yourself!