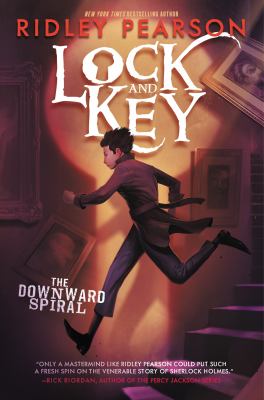 Lock and Key: The Downward Spiral is a take on the classic characters from Sir Arthur Conan Doyle’s Sherlock Holmes series. However in this telling, both Sherlock Holmes and James Moriarty are teenagers attending a boarding school known as Baskerville Academy, which is the main setting of the story (along with the Moriarty’s house). Unlike in other iterations of Sherlock Holmes, Holmes and Moriarty are rivals rather than enemies. Holmes is a socially awkward, incredibly intelligent teenage boy, who uses logical deductions to solve mysteries. James Moriarty is nearly the exact opposite: charismatic, logical almost to a fault, and morally ambiguous. Together with Moria, James’s sister, a sarcastic and smart girl, they team up to discover the mystery behind Moria’s and James’s father’s “accidental” demise. While trying to follow the trail of information their father left them, they have to deal with two mysterious organizations working to follow the trail too.

Overall, the book was an entertaining read. All of the mysteries presented within the story were engaging and never over stayed their welcome. Most of the characters in the book were compelling, and the dynamic between the three main characters, Sherlock, James, and Moria, kept my interest. James and Sherlock might have been full on enemies if Moria didn’t exist. Moria has a crush on Sherlock and her brother James is all that’s left of her family. However, there are a few characters that are frustrating because their actions seem inconsistent with their personalities and loyalties. Although part of the mystery (and the appeal of the book) is figuring out who to trust, it often leads to a few characters whom seem to have no discernible personalities. The book also suffers from a huge cast of side characters who become hard to keep track of.

With the brilliance of both James Moriarty and Sherlock Holmes, there are many clever ways the characters solve mysteries. One of my favorite moments is when James Moriarty believes he is being followed by bodyguards from his father’s organization. In order to figure out whether or not his belief is true, he asks one of his friends to tackle him and beat him. When James is tackled by his friend, his body guard appears to stop the boy from hurting James. It’s such a clever way to test his suspicion and it stood out to me as one of the most memorable moments in the book.