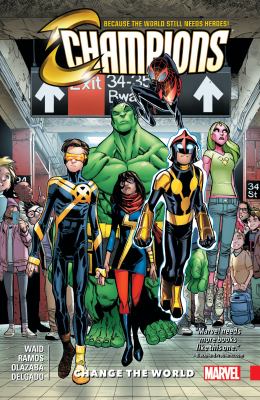 Change the World is one of a few stellar graphic novels in the series, Champions. Change the World stars the next generations of Marvel Superheroes led by the children of the Marvel Superheroes that we all know and love. This book’s stars include Miss Marvel, Spider-Man, Nova, Totally Awesome Hulk, Viv Vision, and more. These teens want to Change the World on their own away from their parents in the Avengers who only care about fighting the battle and not cleaning up afterward. The Champions starts off as an idea and eventually turns into a full-scale team of superheroes working to save the world in a better way.

I liked the intense pace of the novel along with the quality of the art and captions which guided me through this graphic novel. Although the captions and speech of the characters expanded more on the backstory, I feel that if you don’t have enough background knowledge of the Marvel world, you will be lost really easily. I enjoyed this book though as I liked seeing the corners and unexplained parts of the Marvel world be explained more and the stories you don’t think about come out. I also liked the strong will of the characters and that it shows me that no matter how old you are, you should be independent and can change the world too.

The most memorable part of this graphic novel was that I learned that through a few words and a picture, you can say a lot. It surprised me when I saw the picture and read the captions and realized,”Wow! I understand!”