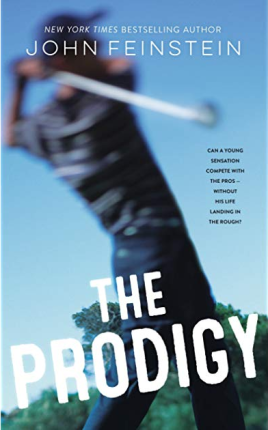 Click here to place a hold on this book.

The book “The Prodigy” is about a boy named Frank. He starts off his golf career with a boom! He won the PGA’s tournament, but ever since he won the tournament he has been called the Perrington Prodigy, the next Tiger Woods. Agents have been lining up at his door and have caught his father’s ear, pressuring Frank to go pro and sign deals with big-name companies. Frank has other plans – including attending college. What will he do?

There is no one Frank can confide in until he meets one of his coach’s old teammates, Keith Forman, a renowned golf reporter. Keith Forman helps Frank in his career and guides him in what competition to participate in and what interview he should do. This might be a problem after college starts! Will Frank be able to face the pressure of being a teenage prodigy? And more importantly, on his road to fame, who can he trust and who will betray him?

I like the connectivity of the book. With any struggle or success pop up, the flow would not stop. The characters were designed with a great personality. Frank and Keith were the best fit for this book. This book demonstrates the value of never giving up. Keith promoted Frank’s inner spirit, with any ups or downs they would be together and would be happy.