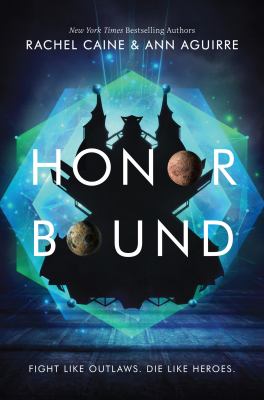 Zara Cole, a thief back on Earth, never expected to be an Honor, one of the Earth’s mightiest who are given sentient spaceships called Leviathan to command. After a savage attack by the Phage, the Leviathans’ sworn enemy, Zara, her co-pilot, Beatriz, and their Leviathan, Nadim, barely escaped with their lives. Now on the run with another Leviathan called Typhon and its crew, they need a refuge where they can rest and their Leviathans can heal and upgrade their armory and weapons. But with nowhere else to go and being chased by the Phage, the crew end up at the Sliver, a dangerous sanctuary for criminals. After avoiding danger and earning money thanks to Zara’s invaluable skills from her time in the Zone, they get invited to meet Bacia, a god-like being who is the ruler of the Sliver. After being tasked with a near impossible mission, it is up to Zara to run away or go through with the mission that might turn the tide of the war they are trying to run from.

“Honor Bound” was quite an intriguing read. The authors really knew how to tell an interesting story as the pacing was just fast enough that it didn’t feel like the book was a slog, but not too fast that it felt like the book skimmed by everything. The characters were all also very interesting as all of them had interesting back stories which gave them depth. Something else which made the characters interesting was that some of them were aliens. This added some depth to the book as the authors gave these aliens their own cultures, customs, and beliefs and really spiced things up as reading only about humans can get pretty boring. The only part of this book which I disliked was the two easily distinguishable writing styles of the two authors. It was easy to notice which author wrote which part and the changes in writing styles was jarring every time it occurred as one author was very formal in their writing style while the other preferred to use informal language. It was a good thought to have two authors writing one book, but the execution just wasn’t there.

The most memorable thing about this book was the fact that it was written by two authors. I have never really read such a book where two authors write a book and it was interesting. But it was not really executed well and the changes in writing styles felt jarring which really took away from the immersion.