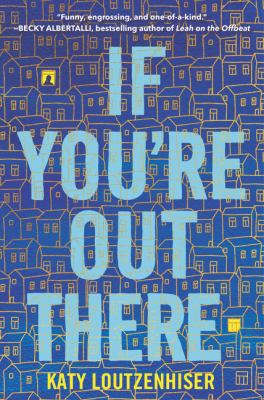 If You’re Out There by Katy Loutzenhiser is the story of high school freshman Zan, and her life after one of her best friends, Priya moves to California. Even though this may not seem out of the ordinary, Zan starts to get worried about Priya once she stops taking calls, answering emails, and keeping all her old friends completely out of her new life. Zan is convinced Priya is trying to reinvent herself, but she still holds on to the hope that Priya is not just finishing their friendship. It’s only when Zan meets Logan, the new kid in Spanish, who’s totally willing to throw himself into her investigation, that things start to take off. Soon, Zan and Logan start to discover that the Priya online might not be who she says she is to be, one selfie at a time.

I actually enjoyed this book a lot. In the beginning, the book started off with a strong, compelling hook, which made me keep on reading, even through some of the more dull parts. The writing was decent I guess, with nothing too great about it, but what really drew me into this book was the plot. The plot itself was one of the more appealing sides of the story, and the book kept me on the edge of my seat for the whole time. The characters were well written and likable, with me relating to quite a few of their struggles. Overall, the book was okay. Nothing was too special about it, but nevertheless, it was an enjoyable read.

Probably one of the most memorable parts of the book was the investigation itself. I really enjoyed the process in which they uncovered each clue, with me on the edge of my seat when there was a new breakthrough. Once the ending came, it was also satisfying to see all the clues come together and to find out all the build-up did actually lead somewhere.