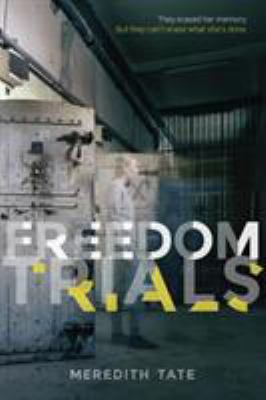 Evelyn Summers was unceremoniously dumped into jail when she was just a freshman in high school, and she has spent two years since then imprisoned with no idea why. All she knows is that she did something bad enough to land her in jail. Evelyn’s memories have been carefully and selectively wiped by the authorities so that she has no memory of the crime she committed, and she has spent her time in jail doing exactly as she’s told in hopes that she can be released into the real world and see her mother again. Finally, the day comes, and Evelyn and several other prisoners are called forward to complete the Freedom Trials — a series of seven mental and physical tests that they must pass in order to be freed. The catch? One failed trial, and they’ll be executed by firing squad. Evelyn’s fellow inmates already hate her because of something she did in the past, and she’s beginning to realize that it’s a hatred deep enough to compel some of them to resort to sabotage. As if she didn’t have enough to deal with, Alex Martinez, a new prisoner who apparently knows Evelyn and her crime, arrives. Against all odds, Evelyn must succeed so she can finally be free.

This book was a definite page-turner, and it had me on edge the entire time. Filled with suspense and secrets, the book’s mysteries weren’t convoluted enough to have me confused, and they weren’t predictable enough to make it a boring read; there was just enough thrill and enigma to keep the book going. It was fast-paced and well written; I liked that there was a lot of action, and I felt as though I were right there in jail with Evelyn. There was some really nice character development going on, and I could tell that the author had spent a lot of time creating this book’s world and describing it with details. Complete with twists, turns, and surprises, this book was the perfect dystopian novel.

One memorable thing about the book was that it was written in alternating perspectives, switching between Evelyn’s present-day encounters and her journal entries from when she had just been jailed. A certain event from her past that was hinted at in the present was acknowledged and explained in the journal entries, but the unique thing was that the gap between the introduction of the event and the explanation of the event created suspense — and a little confusion. This was because the author talked around it and avoided describing it directly, but also stressed its importance by hinting at how disgraceful and shameful it was. In the end, the secret lived up to its foreshadowing, and added another layer of complication to the novel.