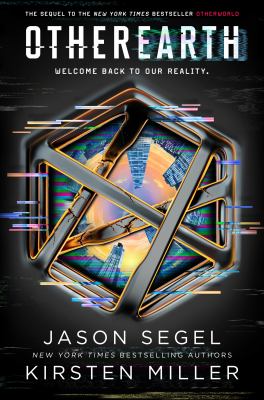 “Other Earth” is the sequel to the best-selling book, “Other World.” Imagine a virtual reality game where all five senses are used. You can even smell and feel in that virtual world. Due to a bug in the game, if you get hurt in that world, you get hurt in real life. If you get killed in that world, you die in real life. The Company, the designer of the game, knows this and is trying to fix the code, but is killing people in their de-bugging experiments. Eighteen year-old Simon Eaton and his three friends are trying to destroy the Company in order to end the killing. This involves traveling back and forth from the real world into the virtual world, where they face danger and death in both places.

This book is told in the first person, so you are able to “hear” Simon’s internal thoughts. Because of that, Simon’s character is well developed. Plus, he has a funny sense of humor. The story was entertaining and fast paced moving from the dangers in the virtual world to those in the real world. I thought the authors were very creative in not only thinking up the different places and characters in the virtual world, but also in describing them. It almost seemed real. It really made me wonder what it would be like to go to this world and be able to do anything that I wanted (minus being killed, of course).

My only recommendation is to read “Other World” before reading this, the sequel. The story is a continuation of the first book, but fortunately written in a manner where the reader is not lost. However, I feel like I would have gotten more out of it if I had read the prequel. There will be a third book in this series coming out in the fall of 2019. I am looking forward to reading that.

One memorable thing about the book was a character named Fons.  He lived in the virtual world, but in that world he was as real as can be.  He had thoughts, feelings and desires.