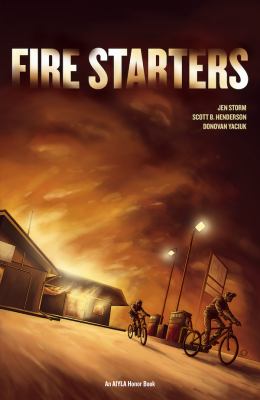 This book is about two boys, Ron and Ben, who discover their uncle’s flare gun. They decide to play with it and end up getting in trouble with the police. Ron and Ben are wrongly accused of setting a gas bar on fire with the flare gun by the sheriff’s son. Meanwhile, Jason, who knows the truth, can’t decide between being honest and risking himself or turning a blind eye and staying safe. Will he make the right the decision? Read the book to find out.

This book takes place mainly in Ron and Ben’s home (which is on Agaming Reserve), the gas bar, the dump, the police office, and North Falls Highschool. The main characters of this book are Ron, Ben, Michael, Jason, the sheriff, and Grandma. Like mentioned before, the book follows Ron and Ben as they are wrongly accused of arson. I liked the story this book had. It was different and not like any other story that I had previously read. I also enjoyed the fact that the characters were diverse, both with their ethnicity and personalities.

I enjoyed the book and thought that it did an amazing job of illustrating the struggle of determining what is right and what is wrong. One thing that I believe could be improved is the relationships between the characters. While some characters did seem to have developed relationships with one another, others didn’t. Other than that, I enjoyed the book and would recommend it to anyone who wants to read about a good moral struggle. One of the most memorable things about the book is its vivid illustrations. The illustrations really seem to capture the scene. One can tell what a character is feeling by just looking at their face. This, coupled with the text, allows the reader to gain a greater understanding of the story.