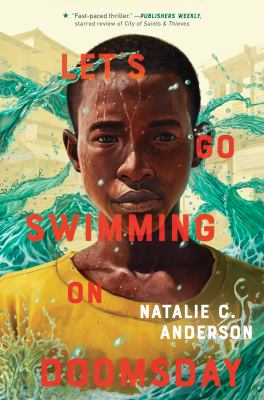 Let’s Go Swimming on Doomsday is a story that is given in pieces and fragments of prior and current events. The past events are focused on a boy named Abdiweli who lives in Somali and whose family was torn apart in a world of terrorism. After he discovers that his family was kidnapped by a CIA organization who offers his family in exchange for service as a spy, he sets out on a journey to collect information from a terrorist group named Al Shabaab. In hopes of getting information from Abdiweli’s brother, a now prominent member of Al Shabaab, the organization forces him to join the ranks of the Al Shabaab and find out just how much his brother has changed. On the other side of the story, we see Abdiweli’s future, an abandoned boy who has no one to go to or be taken care of, still living in Somali. In his past, he is guided by the person who kidnapped his family, Mr. Jones, and in his future he is helped, accompanied, and questioned by Sam, a U.N. worker in Somalia.

The main plots that interchange in the book is Abdiweli’s past and his current situation. His past, being his life as a spy, a brother, and a not-so-faithful member of Al Shabaab. His future, a boy who is left with no direction, shunning away his past and is not welcome to help of any kind. I enjoyed the fact that the time periods interchanged due to how it was executed. The author manages to push your perspective around not by character, but rather time period, yet the plots don’t conflict or reveal each other. This interchanging is noticeable from the very start of the book and was one of the first things I felt was important when reading it. Though, this interchanging is not consistent. Sometimes, the author will extend the time between interchanging by several chapters. This change, however, benefits the flow of the story, extending critical events several chapters to provide proper room for the important interaction or events.

By far the most memorable part of the book is the universal feeling of having no control. Whether that be being forced to work towards someone else’s goal as a spy, or being taken and questioned around like a dog by the U.N. workers. This theme is also noticeable in the way the information and plot are given. It is from a point of view that at first, organizes the events so that it glosses over some of the more important and revealing points of the story. The story, despite its conflicting times, spoon feeds information to you successfully and leaves the far more critical events to the end, despite its diverging time periods.