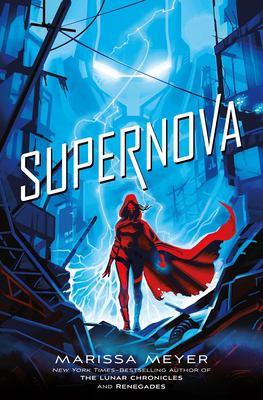 In the final book of the Renegades trilogy, the heroic Renegades and the villainous Anarchists are surprised by the reappearance of the supposedly deceased Ace Anarchy, leader of the Anarchists who brought ruin to Gatlon City years ago. The Renegades are a group of “prodigies,” people with powers, who have become the law and order of Gatlon City, while the Anarchists are a group of anti-Renegade prodigies trying to bring a new order to the city. Nova Artino, also known as the Anarchist Nightmare, has been undercover in the Renegades to destroy them from the inside, although the recent attack on the Renegades’ headquarters has put her actual identity at risk. Adrian Everhart is a Renegade with an alter ego known as the Sentinel: a vigilante operating outside of the Renegades’ law. Nova and Adrian’s alter egos are both threatened by the unveiling of Agent N, a powerful serum that can permanently remove a prodigy’s powers. When allies and enemies alike fall victim to Agent N and Ace Anarchy regains his powers, the final battle between the Renegades and Anarchists looms near.

I’ve been following this series since the beginning, and I have to say that Supernova had the most satisfying ending that I’ve read in a while. Without spoiling anything, watching Nova and Adrian’s journey have its ups and downs throughout the trilogy was what made them seem real and relatable. Nova’s constant inner battle between her conscience and herself felt like an analogy towards the way my brain worked in general. In comparison, Adrian’s conscience held him back from telling his friends and family the truth about being the Sentinel, and consequentially, it caused him grief. The two main characters felt like night and day, opposites attracting each other. Their characters made me remember that although they were superheroes, they were still human. I also loved how the minor characters played a bigger role compared to the last installation of the Renegades trilogy, and while I can’t go into specifics, I can say that their significance plays into the ending. Another thing I realized with this book was that this series felt like a fresh take on the superhero genre with its overarching plot, so this is an excellent book series for those who are getting tired of the same old superhero tropes. The overall story of Supernova relies heavily on reading the last two books, Renegades and Archenemies, so I would recommend starting from the beginning.

Although there were many memorable moments in the book, one of the few moments that really stood out was Adrian helping Max, one of the Renegades with the ability to steal anyone’s powers and Adrian’s adopted brother, sneak out of the hospital and test out his flying abilities. There was something about that brotherly moment that just felt so peaceful in contrast to the hostile tension held by the majority of the characters throughout the book. Adrian knew being with Max would increase the risk of exposing his secret as the Sentinel, but he did it out of the compassion in his heart anyway. It was such a touching moment, and I loved every word of it.