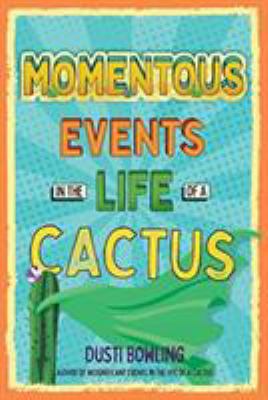 Momentous Events in the Life of a Cactus is the sequel to Insignificant Events in the Life of a Cactus. In this novel, Aven Green is still adjusting to life in Arizona. Although she has two great friends Zion and Connor, she has started high school, and everything is much harder than she anticipated. Aven is used to being stared at, after all she was born without arms. However, there are more kids in high school to stare at her, the sinks are too high to sit on, and Aven thinks her best friend Connor has replaced her with a new best friend.  Then worst of all, there is the ‘big humiliation’ that happens at the mall. Aven’s emotional struggles lead her to lose interest in things she enjoys, question her confidence, and shut her friends out. Can she survive high school without losing herself?

This book picks up right where Insignificant Events in the Life of a Cactus left off, which I liked. However, what I didn’t like is that Aven is upset a lot in this book. Of course, she has a lot of reasons to be upset. For starters, not having arms makes everything a challenge. Then her best friend Connor moved away, her llama is sick, and Henry, one of the employees at Stagecoach Pass, is showing signs of dementia. Finally, there are the crushes and just being a teenager in high school. Aven is not quite sure how to deal with boys because she thinks no one could ever like her in that way. I didn’t like that Aven seemed to have lost her confidence in this book. I know she is in high school now, but she complained a lot and took her family and friends for granted.

The most memorable part of this book was when Aven and her friends went to Comic-Con. Not only was it interesting to hear about the different characters at Comic-Con, but this is where Aven really found her “voice.” Aven usually tries to blend in, but at Comic-Con, she found her confidence and wanted to be seen and heard.