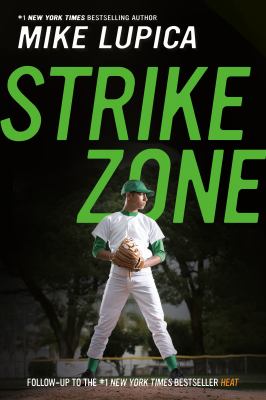 It’s summertime, and Nick García is just trying to have fun playing baseball with his friends, but that’s hard when his dad is trying to avoid ICE, Immigration and Customs Enforcement. Then, the stakes are raised when Nick learns that the MVP of the summer tournament will throw the first pitch at the Yankee Stadium. Nick’s team not only has to win the tournament, but Nick has pitch the best he’s ever pitched, but after a while, his pitching has caught the attention of some people that Nick doesn’t want to see. On top of this all, Nick is trying to get Marisol, the first girl he’s liked, to come see his games.

Personally, I thought the prequel, Heat, was much better and the characters were more defined. In Strike Zone, one of Nick’s friends, Diego, was supposed to be really funny, but none of his jokes were actually funny and made me laugh. Strike Zone was still a good book, but it felt more of a copy instead of an original. The plot with Nick’s father and ICE was pretty good, with all of the characters getting involved and Nick reflecting on his family as immigrants.

One thing that really stuck with me about this book was how dedicated Nick was to his team and baseball. He is going through so much with his family, but still manages to practice with his friends and team. I find it inspiring, because even through tough times he still did what he loved.