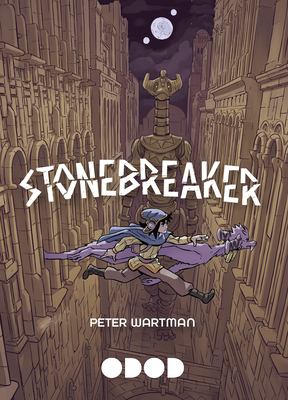 Within the ancient ruins of Noridun, the nefarious demons roam the razed earth. Anya continues to struggle as she pursues the focus stones to cure her amnesiac brother. Robbed of his memory during an encounter with a demon, Anya’s nameless brother fades as the days progress. Fortunately, Toris, a traitor to demons, aids Anya upon her daunting quarry. However, the human village despises her imprudent excursions and advises her to cease the futile effort to save her brother. Toris gradually unearths his past as a demon, revealing a purged secret that may transform the fates of Anya and her brother. Mysteries unravel, and the foul legends become reality as danger grips Toris and Anya.

“Stonebreaker” swarmed with action, and feats of valor. The reader may certainly become immediately riveted by the captivating climax and prologue. The novel’s plot somewhat resembled a tumultuous current, as the tale rapidly revealed numerous twists and clues. A stunning sequel to “Over the Wall”, this novel roused a sense of thrill and suspense. Lastly, I became astounded at the author’s ability to illustrate the entire graphic novel in a monochromatic scale.

A memorable moment lies within the opening scene, as Anya discovers a scroll with a daunting legend. As she carefully navigates her favored childhood tale, Anya deftly escapes a harrowed dungeon. Rain patters the razed cobblestone path, as Anya flees the realm of demons. Sprinting to her haven with Toris, Anya confronts a builder demon, who immediately attempts to slaughter the girl.