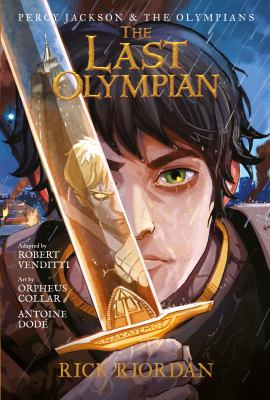 As Kronos stirs within his realm, Percy Jackson receives a cryptic notice that the final battle of the Titans may transpire. Attaining the knowledge of a battle, the half-bloods residing at Long Island frantically attempt to prepare for the concluding war. Percy seeks the anguished tale of Luke Castellan, a former half-blood whose mind teeters at the mercy of the Titans.  The quaint army unearths discreet indications regarding the bloodstained legend of the Titans, including Kronos. Prophecies become reality during the final establishment of Percy Jackson’s war with the formidable Titans.

Unfortunately, the graphic novel of “The Last Olympian” proved as a rather baffling tale. I believe the plot was not correctly portrayed within the graphics, which did not aid in informing the reader. Furthermore, I became unable to the grasp the progression of events, and therefore failed to comprehend the story. Characters within the graphic novel arrived unannounced, and failed to provide names or purpose of presence. In brief, I became rather dissatisfied with the narration and description of the climax, plot, and characters.

A memorable event resides near the beginning of the novel, as Percy deftly battles Luke’s demon battalion. Countless weapons, including the vast array of swords, daggers, and crossbows, remain focused upon Percy. Entrapped within the cruel clutches of a departed ship, upon the tumultuous sea, Percy hastily attempts to form a means of egress. However, Luke arrives upon the deck, casts a wry insult, and raises his sword aloft.