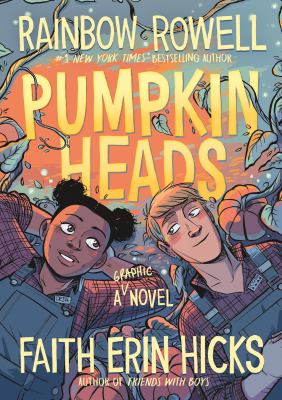 Every fall, Deja and Josiah have worked together at the world’s greatest pumpkin patch/autumnal jamboree. They’re reunited every September 1st, make succotash at the Succotash Hut, and say goodbye at the end of the working season each Halloween. They’ve been doing this routine all throughout high school and were just fine doing it. But when the Halloween of their senior year rolls around, Deja decides it’s about time Josiah finally talked to the girl at the fudge shop he’s been crushing on since orientation. What follows is an adventure of irresponsible behavior at the workplace, as they ditch their jobs to journey around the patch, reminisce about good times, stop for snacks, narrowly avoid encounters with a raging goat, and try to track down the elusive fudge shop girl. Hey, it’s their last time working at the patch before college; why not have some fun?

I greatly enjoyed following them around on their quest to find the fudge shop girl. It was fun, heartfelt, had plenty of gags, and showed off all the various food stands and attractions. The writers did a great job creating a fictional jamboree, because man I wish I’d gone there as a little girl. Overall, it had a whole lot of personality and truly captured the joys and nostalgia of fall. All the characters, even the one-offs, felt like a part of a larger, untold story. I recommend this for sure.

My favorite part of this book was the bloodthirsty goat that kept showing up. He had nothing to do with the story, and not once was he referred to by the main characters apart from his initial mention, he was just a funny background gag.