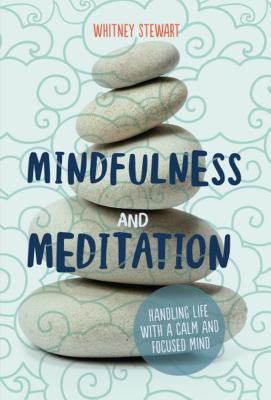 Mindfulness and Meditation: Handling Life with a Calm and Focused Mind by Whitney Stewart discusses and conveys the significance of mindfulness, as it expresses the importance of comprehending your emotions regarding stressful events or situations. This book also states that meditation is characterized by the ability to remain poised and intent while maintaining a relaxed and calm disposition and mind since this will cause an increase regarding the aspects and structures of the brain that are associated with the ability to retain memories and the processing of information, such as gamma waves within the brain, as they are considered to be the swiftest classification of brain waves. Moreover, another essential benefit and aspect of meditation are that it increases the amount and level of happiness within the brain, as it activates the prefrontal cortex of the brain, which is connected to happiness. Multiple examples and positions of meditation are presented throughout this book, as it describes the correct position regarding meditation, as well as various methods to perform it, such as the “Lotus”, “Half Lotus”, “Burmese”, “Chair”, “Seiza”, and “Prone”. Additionally, Buddhism, an ancient tradition and religion that originated within Asia, is perceived as being an essential aspect of Buddhism, as it provided the foundation for meditation and mindfulness, as the founder of Buddhism, Siddhartha Gautama, had observed multiple instances of sicknesses and pain that was considered to be an aspect of suffering within human society, which caused him to depart from his previous position within society, a prince, and attempt to experience and endure the conflicts and difficulties that the members of society had encountered, although this caused him to engage in meditation, which allowed him to eventually attain enlightenment. The Buddhist religion also inspired several people that were mentioned throughout this book to adopt the Buddhist religion. Throughout this book, multiple instructions and suggestions are included to explain the various types and components of meditation and mindfulness. Therefore, this book expresses the importance of mindfulness and meditation through various suggestions and ideas that are presented.

Regarding the content of this book, I thought that it was quite extensive and informational, as it provided multiple examples and suggestions regarding mindfulness and meditation, and it also encompassed detailed explanations regarding the steps that are required to effectively perform meditation, such as assuming control concerning emotions by focusing on your breathing, as it will gradually relax your mind. Moreover, this book was also quite personal, as well as convincing, as it included interviews from teenagers, concerning the subject of social media, as well as methods regarding coping with stress. Additionally, this book also served as an insightful novel, regarding methods and categories of meditation that is designated to remove the influence of detrimental thoughts, and it also provided information and advice regarding attempting to ensure happiness, as well as coping with painful experiences. Regarding the plot of this book, I considered it to be insightful and thoughtful, as it incorporated multiple benefits of meditation, such as an increased level of focus, as well as an increased level of happiness. This is indicated by the frequency of ideas, suggestions, and advice that are present throughout the book, as well as the pictures that illustrate the various positions for meditation. Therefore, this book was quite insightful and informational, as it discussed the benefits of meditation, and it also supplied a variety of questions that encourage mindfulness and meditation.

One memorable thing about this book was that it stated various factors and aspects that could potentially result in happiness, such as engaging in exercises, experiencing sunlight and nature within the environment, and by engaging in a sufficient amount of sleep. This was a memorable moment regarding this book, as it implied that it was quite simple to increase the levels of happiness within your life. Furthermore, this book also provided advice and suggestions regarding the various factors that can increase happiness, as it stated that exercise possesses the ability to increase the production of chemicals within the brain, such as dopamine, that is associated with happiness. Moreover, this book also included various sections that offered examples and instructions regarding methods that increased happiness, such as recalling a joyful memory or engaging in compassion regarding oneself. Regardless, aspects of this book that I liked were that it incorporated multiple examples of mindfulness, as well as methods of ensuring happiness, although an aspect of this book that I disliked was that it uses a variety of contrasting fonts and colors throughout the book, which could potentially produce an unnecessary distraction, as the various fonts could potentially cause the reader to divert all of their focus regarding one section of the book, instead of focusing on all of the sections of the book.