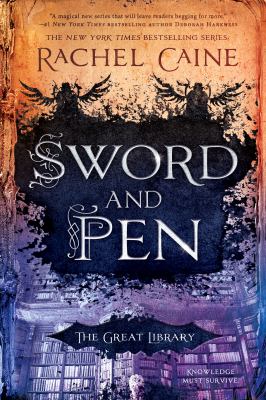 Sword and Pen: The Great Library Series, Book 5, written and composed by Rachel Caine, discusses the experiences and journeys of Jess Brightwell, as well as his desire and intention to remove the Archivist from his position of power, as the Archivist had opposed the Great Library. Furthermore, Christopher Wolfe, a scholar of the Great Library, was also designated as being the guardian of Jess, as his twin brother, Brendan, had perished. One of Jess’s allies within this story, Dario Santiago, who originated from Spain, is a member of an exclusive family, although Jess and Dario did not completely trust each other, as they did not maintain a consistent friendship. Although Jess had attempted to infiltrate the office of the Archivist, he had ingested a poisonous gas, that limited his breathing. Regardless, Jess was transported to a Medica, who supplied him a mask that would permit Jess to breathe more efficiently, though the Medica stated that the function of the mask would degrade, as Jess utilized it.  Another essential character, Niccolo Santi, is also a crucial commander of the Great Library, and he also aims to preserve it by aiding the remaining members of the group, which consists of Wolfe, Jess, Khalila Seif, Glain Wathen, Morgan Hault, an Obscurist, Thomas Schreiber, an inventor of the automata, and Anit, the daughter of Red Ibrahim, a character who served as an associate to Jess. Therefore, Jess, as well as his allies, endeavor to remove the influence of the Archivist.
I thought that this book was conflicted and turbulent, as it focused on a large number of characters that were central to the plot and events of the story that is occurring throughout this book, as well as the entirety of the Great Library Series. Furthermore, I also thought that this book was quite dramatic. Moreover, my opinion regarding the central characters of this book, which consist of Jess, Santi, Scholar Wolfe, Glain, Morgan, Khalila, Thomas, Anit, and Dario, is that this book exceeds the number of central characters in a story, implying that the characters would no longer be memorable since I was unable to remember all of the details and characteristics of some of the characters. Regarding the plot and the setting of this series, I believe that all of the characters’ unique roles and purposes are designated to represent the setting and the plot of the story, which occurs within the Great Library of Alexandria, as Wolfe is a scholar of the library, while Santi is a commander of the High Garda, and Thomas is an inventor, who attempts to analyze the structures of the automata, which were designated to destroy intruders. Moreover, concerning the setting and the plot of this story, I believed that the plot was quite intricate, as it encompassed a large variety of characters and events.
One memorable thing about the book was the moment of the book was the connection between Thomas and Jess, as Thomas was offering to risk his life to ensure that Jess remained alive. Moreover, this also implies that Thomas was aware that Jess was a central asset to their plan and intention to disable the Archivist and remove him from his position of power. Therefore, this indicated that Thomas was willing to challenge himself in order to ensure that Jess would remain alive. Regarding aspects of this book that I liked, I liked the various personalities and roles of the characters that were present within the book and the writing style were also effective, as the perspective of every chapter of this book was based on a different character, so I was able to experience the plot of the book from various perspectives, which caused the book to appear more exciting and conflicted. This also indicated that the book appeared to be more interesting since I was able to be introduced to a variety of opinions regarding all of the characters. However, aspects of this book that I disliked were the large number of central characters that were present, as well as the consistency of the setting of the series.