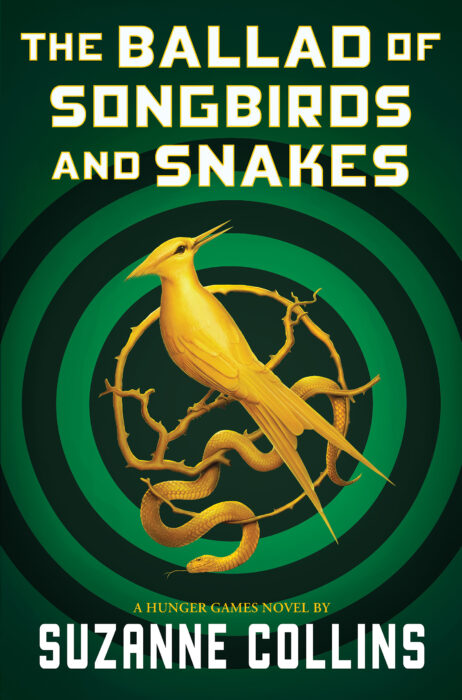 link to no wait eAudiobook here.

The Ballad of Songbirds and Snakes, a prequel based 64 years before the original Hunger Games series. Coriolanus Snow, an eighteen-year-old capital citizen, whose family name is on the verge of being diminished, has an opportunity to change his family’s fate. For the first time in the history of the Hunger Games students from a prestigious capital school, known as the Academy, will have the chance to mentor one of the twenty-four tributes for the 10th Hunger Games. Not only is the Snow family name in jeopardy, but also the opportunity for Coriolanus to make a name for himself. To Coriolanus’ surprise, he has been given the daunting task of being the mentor to the female district 12 tribute, but he quickly realizes that someone else is in charge of his fate.

As a huge fan of the Hunger Games series, I was very excited to read Suzanne’s prequel and what we would entail while reading. The Ballad of Songbirds and Snakes takes place in the Capital from the viewpoint of Coriolanus Snow. Since the viewpoint of Coriolanus is one as a viewer of the Hunger Games, rather than a tribute fighting for their life, you get more depth of the horror that goes around the games that was not achieved in the first books. The plot is rather interesting going deep into Coriolanus’ thoughts and mindset. Since the first books show how evil Coriolanus Snow is, we as readers already know what he becomes, but it is the path that gets him there that is the most interesting. Throughout the book, there will be many unexpected happenings, but there are also some dry spots that make the book a bit dull.

The Ballad of Songbirds and Snakes has many memorable moments throughout the book, but the ones that stand out the most to me are the connections made to the previous books. Suzanne found truly amazing ways to connect the books through her ways of writing. Not all of the connections may be clear to the reader, but the more you dig into the book the more you will find. I really enjoyed the new perspective of The Ballad of Songbirds and Snakes, while many were skeptical about reading about Snow, who we all despise from the previous Hunger Games books, it happily surprised me by how quickly I forgot about what I already knew about him. Throughout the book, I also enjoyed how it was separated into three parts which truly have different plots and characters throughout. There are a couple of things that I disliked about The Ballad of Songbirds and Snakes, one of them being the somewhat dry parts of the book. Since this book is 517 pages, a lot occurs with Snow and the surrounding characters, but there are some times where it feels like the book is at a standstill and not much is happening. Although The Ballad of Songbirds and Snakes cannot compare to the first Hunger Games books, it exceeded my expectations and I cannot wait for the movie!