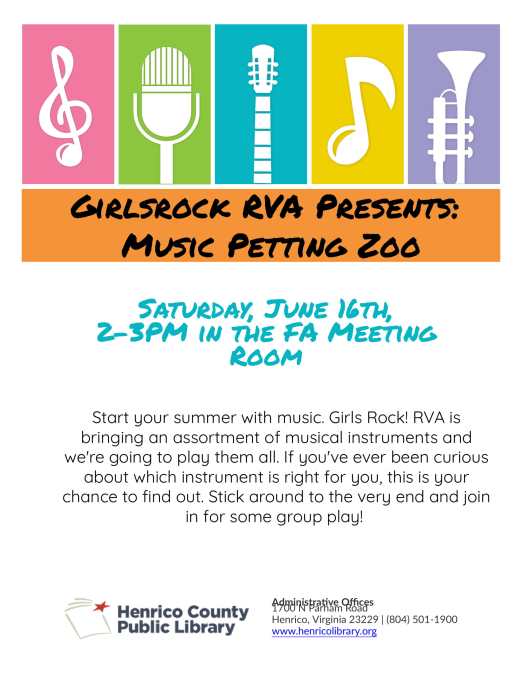 Have you been thinking about playing a musical instrument, or starting a band? Come by the Fairfield Library (1001 N Laburnum Ave, Richmond, VA 23223) next Saturday, June 16 from 2-3 PM and give some instruments a try! Girls Rock! RVA will be bringing the instruments! No registration required. Have any questions? Call 804-501-1930

Serendipity “Pity” Jones lives on the 87th farming commune with her abusive jerk of a father and her equally jerkish brothers. It is after the Second Civil War, The United Patriot Front lost, The Confederation of America won, and Pity’s late alcoholic mother was on the losing side. When her father announces he’s selling her off as a fertile bride to a mining commune, she runs away with nothing but the perfect aim and pair of six shooters she inherited from her mother and her best friend, Finn, headed for the east. Only life throws them a fast one and things start to take a turn, setting the destination to Cessation, a town far to the west where not only can CONA not reach Pity, but it also is known for a lack of law . Thankfully, Pity finds some form of security through Casimir, a grand building that is many things, like a casino, at once, ran by a woman named Selene, whose word is law in Cessation. She soon lands a job as a new act at Casimir’s theatre, which features talents ranging from acrobat to knife throwing. She makes tons of new friends, gets to nourish her sharpshooting to its full potential, and meets Max, a stagehand who make her heart flutter. She should be happy; but this is Cessation, where killing is the norm and its laws decided by one woman, who Pity still needs to fully prove herself too if she has any hope of staying. When the darker aspects of the theatre become more clear and a sinister plot begins to convey itself, Pity must decide for herself what is righteous justice, and what is murderous vengeance.

I really loved this book. At first I thought this was just going to have a typical old western setting, but it turned into something much more creative then that, taking place in a time in the future that resembles an old western by drawing parallels and similarities to it. At the same time though, I feel like there is some wasted potential. Some questions involving the setting’s backstory are still left unanswered, and, with the current lore, I see so much more potential for further world building and more stories to come from it. At the same time however, I am wholly satisfied with the way the main story and plot itself ends and feel like a sequel would be really unnecessary. I am so incredibly conflicted. On a negative note, there are a few characters here and there who I felt that could be handled better in terms of their impact on the story and their foreshadowing about their relations to certain people.

There are so many different memorable moments in this book it would be hard for me to choose on as an example. I will say this, I like the ending, it felt simple and realistic, yet satisfying.

Like comics? Do you have a favorite fandom? Like to read? Do you like to dress up as your favorite character? If you answered yes to any of those question, then you will want to go to Henrico County’s LibraryCon that is happening June 30th from 1-5 PM at the Twin Hickory Library! (5001 Twin Hickory Road, Glen Allen, VA 23059).

There are going to be events for all ages! Including an all ages costume contest, green screen photo booth, door prizes, teen gaming, anime screenings, karaoke,  and Harry Potter and Star Wars themed escape rooms! There will also be local vendors you can buy comics and fan gear from. Plus there will be a special appearance from local storm trooper squad, the 501st Legion. You are not going to want to miss this event! For more info call the Twin Hickory Library at 804-501-1920, or ask your teen librarian! Check back here or at henricolibrary.org for more info leading up to the event.

This is the true story about a ginger nerd’s rise from socially awkward laughing stock to quick-witted comedian. Steve Hofstetter had everything going pretty alright for him at school, that is, until he got accepted in a fancy smart school called Hunter, where he knows absolutely no one and no one knows him. It would have been fine if it was just left as that, but he tries way too hard to get people to like him at first and winds up at the bottom of the social ladder. Now he has to deal with the most painfully uncreative bullying tactics possible done by bullies who thought they were geniuses, a real life Regina George, relationships fueled by no real love, huge jerks, a may-or-may-not-be-an-actual-gangster with a switchblade, his own dysfunctional and cheap parents who are borderline hoarders, and his own lack of social experience to work with. He soon gradually begins to earn his own friendships, learns plenty of lessons about love and what a friend truly is, gains confidence, learns about his skill for improv and cultivates a sharp wit to go along with it, joins a Jewish youth group, develops a positive reputation for himself, and finally rises up from his socially doomed status, although he still a huge nerd (and there is nothing wrong about it!).

I really liked this book. I found it to very interesting and funny. I always enjoy getting to learn about other people’s life stories and perspectives, and I feel as though I’ve actually learned some useful tips about interactions with other people.

I thought the most memorable part of the story was the one where he goes to prom. Not to spoil anything, but it is very sweet and satisfying to see how far he’s come in life.

Every time someone mentions Ryn’s best friend, who had died in a car accident on New Year’s Day, an emptying realization hollows out her chest. New Year’s Day is supposed to represent the success of making it through another three hundred and sixty-five days. It’s supposed to give opportunities to start afresh and anew. Instead, New Year’s Day makes Ryn’s throat close up and tears cascade down her face like a waterfall runs down a mountain. Ever since the car accident, Ryn has been receiving therapy sessions and sympathetic looks from other people. None of it has helped her, and she hasn’t been able to cope well with the aftermath. Now, Ryn is stranded in an airport in the middle of a raging blizzard on the day before New Year’s Day. She encounters many people who help her realize that the only way to move forward is by letting go of the guilt about her best friend’s death. This novel touches on loss and grief. It teaches people that it’s okay to feel guilty, but it’s better to let go to make room for better things to come into your life.

Each character and their personalities stood out boldly against each another, and they all leave an impact on the reader and the plot of the story. It was somewhat hard to follow the disorganized and befuddled thoughts of the main character, Ryn. However, it had really brought the story to life, and it made it authentic. Both hysterical moments and tear-jerking moments were really moving, and a lot of Ryn’s character had hit home with me. Although it had taken me a while to reach the ending, it was definitely worth it.

The epilogue of the novel had left me in tears. It finally revealed the moment that everyone was anticipating, but there’s no doubt that I hadn’t been ready for it. The Chaos of Standing Still was able to portray the sense of loss beautifully, and I would recommend this book to anyone who is going through difficult times.