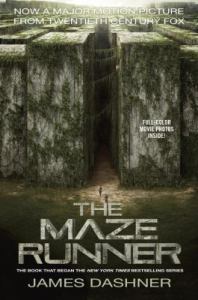 The Maze Runner is about a boy named Thomas who finds himself in a box surrounded by boys who say words that don’t make sense to him. Even worse, he seems to not be able to remember anything about himself, his age, family, etc. He can only remember his name and what he has learned, such as speaking or riding a bike; though, he doesn’t remember who taught him those things. The boys tell him that they have been there for two years and every once in a while, a new person is sent. Thomas most of the time gains vague answers to questions about the place but slowly learns that they are surrounded by a maze that keeps them from getting out. The next day, a girl arrives in the Box, who is unconscious and nearly dead. She is first girl, who Thomas seems to remember from somewhere, though that shouldn’t happen. She woke up immediately, declares that ‘Everything is going to change,’ and falls into a coma and the boys find a paper in her hand that says, ‘She’s the last one. Ever.’

I really enjoyed this book because of the suspense and writing style. There was so many mysteries that connected and lead to even bigger things that I could not put down the book. Everything came as a surprise and seemed so obvious later. The suspense of this book was thrilling and the writing style made the book enjoyable to read. I could picture everything that was happening in the book, even the slight, wry humor thrown in once in a while. All in all, I would definitely recommend this book to anyone who enjoys mystery, fantasy, and suspense.

One thing that is memorable and really stuck with me the entire book, was how all the boys, including those who were living near the Maze the longest, had developed a system of authority and sort of a government, really. I would imagine if you put a lot of boys ranging from the ages 10-18 all in one place and never let them out, I would think that they wouldn’t ever be able to organize themselves and be able to take care of everything, as well as develop a system of authority. All of them realized a lot of things really quickly, which really surprised me.