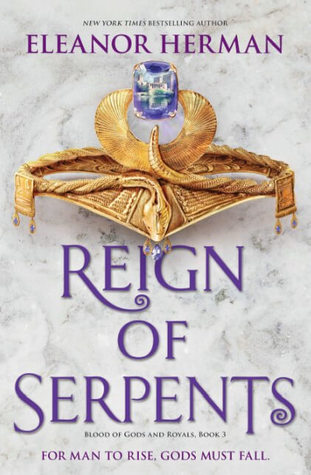 This book takes place in ancient times following a surprising number of characters through Macedon (Greece), Persia (Iran), and Egypt. Reign Of Serpents is the third novel in the series Blood of Gods and Royals, so I would recommend reading the first two, as the characters change and develop throughout the series. While this book follows numerous characters from their point of view, I believe the main characters can be stripped down to Kat, Alexander, Heph, Jacob, and Cynane. Kat, Alexander, and Heph are all allies, and since Alexander is crown prince of Macedon, they support Macedon and its well-being. Jacob is deeply in love with Kat, but he is an Aesarian Lord, a man who banishes magic, even though Kat herself is a wielder of magic.This is a fact unknown to him, but in the end he uncovers something that causes him to leave the Aesarian Lords for the benefit of others. Cynane, on the other hand, is evil to the core, and she will do anything to become the ruler of Dardania, another part of present day Greece. She was deceived by Olympias, the evil queen of Macedon, but her desire to become Smoke Blood (a unique and very powerful magic wielder) still lingers.

Overall, I found this book very interesting, with a boat load of plot twists and intriguingly complex characters. I must say, though, that the constant switching in the characters’ points of view made following their stories more difficult than it should have been. Since every chapter switched characters, by the time the cycle came back to the same character, I had already forgotten most of the previous events. However, the author was able to incorporate more cliff-hangers at the end of each chapter this way, so the book was kept interesting. As for the characters I enjoyed, the character Kat who faced murder, imprisonment, and life-shattering news with courage and determination. Alexander was also an inspiring character who handled the empire of Macedon in his father’s absence, but was possessed in this novel by a supernatural force, stopping his plans for Macedon’s welfare.

From this particular book, I found Alexander’s mind-control memorable because of how much the thoughts and actions of one man in ancient times impacted the whole empire and surrounding lands. With modern-day governments, one person would never have the power to do what Alexander did. Coupled with the constant violence in ancient Greece, it shows how much people have progressed over time!